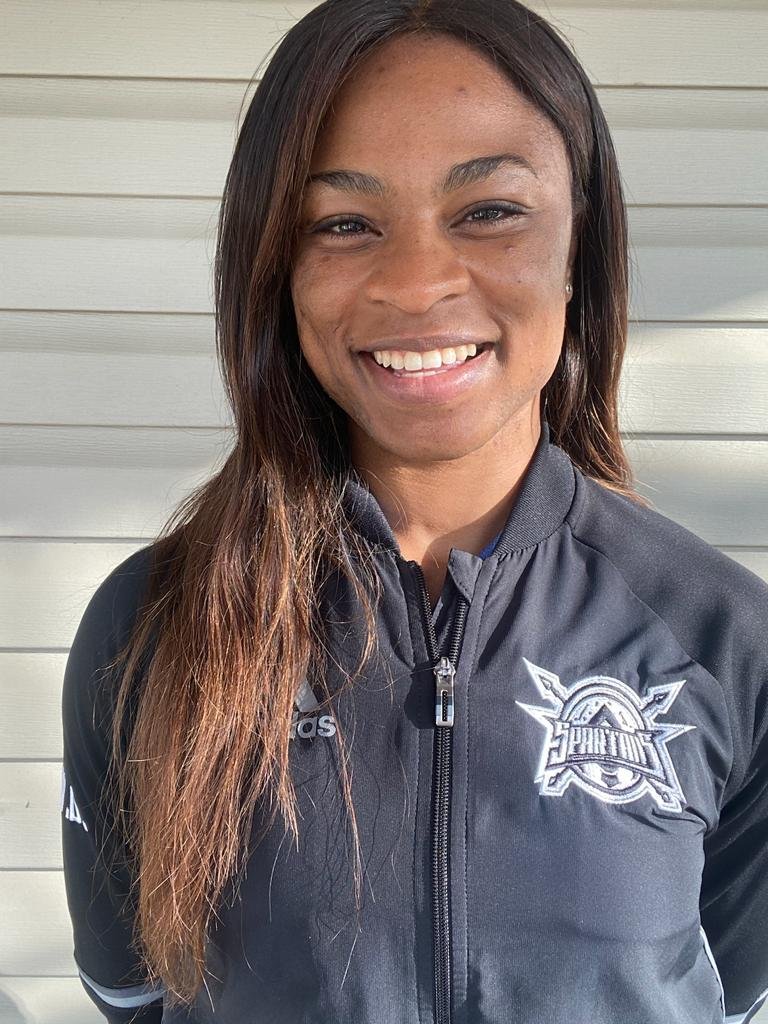 My name is Whitney Dikoume and I am the Academy Manager/Athletic Therapist/Strength & Conditioning Coach for the Spartans Soccer Club & Academy. I graduated from the University of Calgary in 2014 with a Bachelor in Kinesiology and a major in Athletic Therapy, which I got certified by the National Board in June. I was born in Yaoundé, Cameroon and I can speak 4 languages (English, French, Greek, & Spanish).

How did you get involved with soccer?

I have been involved with soccer ever since I was born. I always remember my Dad practicing and travelling around during his soccer career. I played soccer at a younger age and some of my favourite memories are around a soccer ball.

What does being a Spartan mean to you?

To me, being a Spartan means being hard working. I believe that part of being successful is working hard. There are days that it will feel like it hasn’t paid off but it does. Success isn’t only in the “big” things, it can be found in the little steps we take every day. Giving all that we have at that moment into whatever we have to accomplish is a success in itself.

What is your favourite soccer memory?

When it comes to my favourite famous soccer memories, I have two. My first one is when Liverpool came back from 0-3 to beat AC Milan at the Champions league final in Turkey in 2005. I still have a hard time believing that comeback sometimes. My second one is when Steven Gerrard scored a beautiful goal against Olympiakos FC in 2004. It was a beauty of a shot just outside the penalty box that left the goalkeeper stunned and I just remember jumping up and down the living room as if I was in the field.

What is your favourite soccer club?

Even though my favourite moments involve Liverpool, my favourite soccer club is Arsenal. I love the way they are a team. It’s not we have 3-4 star players with a couple more players to fill the roster. The players realise that they have to depend on each other’s ability to win games and Arsene Wenger does a great job of enforcing that.

Who is your favourite soccer player?

I don’t actually have a favourite soccer player. They are great players out there that have definitely proved their value to the soccer world. I think picking just one is very difficult

Who is your favourite soccer coach?

My favourite soccer coach is my dad. I know it sounds cliché but I get to see the behind the scenes thought process that goes into every practice. There is always a reason why those drills were picked, the amount of creativity that goes into the equipment that is being used is just unbelievable, and the inventiveness that goes into keeping the attention of the younger children for a whole hour is definitely surprising sometimes but he does it. I love the passion with which he coaches and how he tries to teach his players to think independently on and off the field. He is the one who taught me how to read the game the way I do, the importance of moving around and not clumping together, and how constructing a play is way more efficient that just kicking the ball around hoping it gets to the back to the net. Everything on the field is done with a purpose and if that’s the mindset with which you play, no ball is left loose, no challenge is left unchecked, and every run, jump, or sprint, is important.